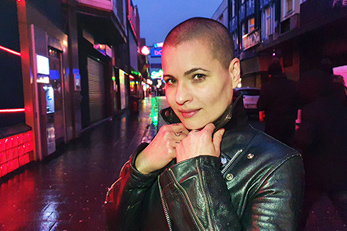 CP Krenkler is a freelance photographer, artist and author.

Around the turn of the millennium, CP Krenkler documented punk rock culture, using analog black-and-white negative film, before her focus temporarily shifted to staging and portrait photography as an assistant to fashion photographer Monica Menez (2001/2002).

After her book and exhibition project titled 10 years later about people in the punk scene then and now (2012) as well as publications of her images in various magazines and newspapers such as ZEIT, Süddeutsche, Archiv der Jugendkulturen, Stern, Freitag, Fluter, Playboy, among others, she began in 2012 to dedicate her work to the changes in St. Pauli – the district where she has been living since 2010.

She completed her studies at the University of Fine Arts in Hamburg with Prof. Matthias Lehnhardt in 2015. Her thesis titled “Buy, buy – St. Pauli” is an artistic examination in words and images of the sell-out of her district.

After her studies, she moved to New York for approximately one year, initially focusing on architectural photography, but then quickly discovered relevance and similarity to her work in St. Pauli. Her photo art project on Chinatown People in front of their working spaces resembles her neighborhood portrait series of St. Pauli. People are the main focus of both photo projects, albeit embedded in their surroundings.

Her stay in New York became a turning point in her career. The interest in her as an artist has enabled her to focus on her artistic work full-time ever since. Her return to St. Pauli thus remained short-lived. Since 2016, she has been commuting between Hamburg and New York. In the meantime, literary texts accompany her photographic work. In her blog, which she publishes on Facebook under the working title “Weird Stories from New York City,” she recorded, for example, the effects of the Corona pandemic on the metropolis. Her texts help her to digest the mass mortality, including the collapse of the funeral system while she watched as the city not only awakened,but truly blossomed during the Black Lives Matter movement after harrowing months of fighting the virus.

Her work at the “Elbschlosskeller” (2017¬-2018) and the “Davidwache” (2017-2021) in St. Pauli includes texts and photographs and has been presented in readings, such as on the occasion of the “Lange Nacht der ZEIT.” She has had five exhibitions in New York and several in Germany, including one in the St. Pauli church on the Elbschlosskeller and in the rooms of prostitutes in the famous Herbertstrasse. In 2019-2020, Hamburg’s Museum of Labor presented her documentation on the police officers of the Davidwache as part of the exhibition titled “Night. Everything but sleep” with an accompanying reading by the artist. In 2021-2022, the Museum of Labor showed CP Krenkler’s work again in the “Conflicts” exhibition. Her photographs of the “Esso buildings” in St. Pauli and the struggle for their preservation are on display there now.

In 2022, the Museum of the City of New York purchased twelve photographs from her portrait series on Chinatown, Manhattan for its permanent collection. 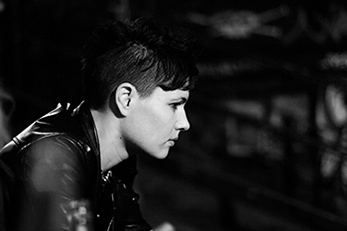 Study of Photography at University of Fine Arts of Hamburg, HFBK / Hamburg.

Und weitere / and others…